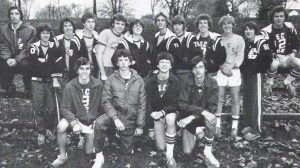 Elyria Catholic’s powerful football teams of the 1970s had to share the state spotlight with the cross country program. The seeds for success were planted and nurtured by the 1973 and 1974 state champions – the first state titles for the school. Actually, the success began in 1972 when Tim Kuhman and Tom Schmidt helped EC to a state runner-up finish behind Chardon. A year later EC won the 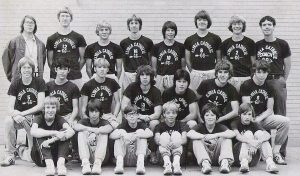 whole thing, placing five runners among the state’s top 20: Kuhman was fourth, Schmidt sixth, Bill Stetson seventh, Bob Schmidt 19th and Jeff Brizes 20th. Lee Korzan and Dave Schlather also contributed to the team’s success. In a sport where the low score wins, EC’s 56 points were less than half of its nearest rival – Colonel Crawford. A year later, Brad House and Eric Essenmacher were on the team as the Panthers defended the championship, beating Tipp City by a whopping 60-110 margin. Stetson was fourth, Brizes ninth, House 10th, and Bob Schmidt 16th. The Panthers almost had five top 20 finishers again – this time missing by one place. The EC success continued with the school winning two more state titles in 1977 and 78. The Panthers were second in 1979 and third in 1975. Dick Elsasser, an ESHOF inductee himself and Tom Mahl coached the Panther runners.